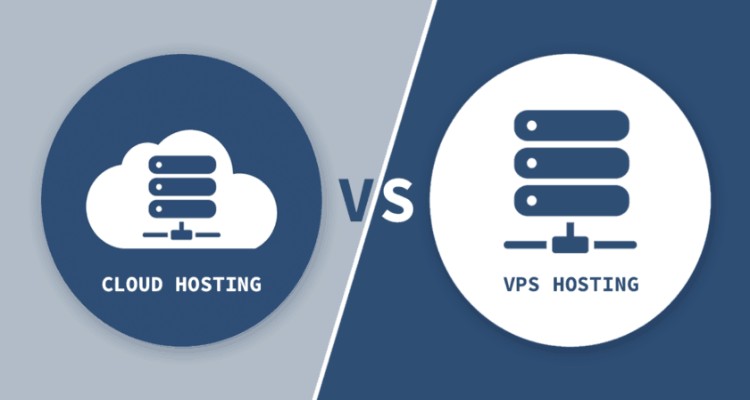 Difference Between Cloud and VPS Hosting

In this article, we are going to tell you about two of the most popular and reliable forms of web hosting – Cloud and VPS Hosting. Also, we will list down the difference between VPS and Cloud.

What is Cloud Hosting?
Cloud Hosting is an arrangement where multiple machines that are connected within a network act as one. With the Cloud Hosting you get all the benefits of cloud technologies as well as the ease and simplicity of Shared Hosting. It provides you the power to scale your RAM and CPU resources and also maintaining redundant copies of your storage to protect against disk failure.

What is VPS Hosting?
VPS stands for Virtual Private Server. VPS Hosting is more like a hybrid of Shared Hosting and Dedicated Hosting. In VPS, a single server is breaked up into different sections with a software known as the hypervisor where in each section acts as an autonomous server. Each of these virtual compartments servers share the resources such as bandwidth, space, operating systems, etc. of the parent server amongst themselves. However, none of these ever have to bear the brunt of the over-usage of another server or even get affected by any failure in any of the servers.
Cloud Hosting vs VPS Hosting

Cloud Hosting have higher availability, better uptimes and blazing fast website load speed and VPS Hosting provides a fixed level of performance since a set level of system resources are dedicated to each virtual server.

In a Cloud Hosting , there are multiple servers connected to each other that store copies of your data. So, in case there is a failure in any of the servers, another available server takes up its operations as files and functional responsibilities of the failed server are instantly migrated to it without any downtime. Thus, there is no single point of failure with Cloud Hosting.

In the case of VPS Hosting, your server is partitioned using a hypervisor. which enables your website to perform optimally with lesser requirements. VPS Hosting makes use of KVM (Kernal-based Virtual Machine).

However, a single point of failure on the part of the parent server i.e. the physical server will lead to a disruption in functioning, and eventually failure of all the virtual servers on that machine. Usually, high demands by one or more virtual servers on the same physical server has the potential to impact the performances of both the affected servers if both of them need extra resources at the same time.

The easy availability of truly high processing power makes Cloud Hosting certainly a lot more reliable and scalable. Cloud Hosting allows you to upgrade your RAM and CPU resources on-demand with a single click whenever you experience a spike in website traffic.
In the case of VPS Hosting, you can neither scale your resources nor the plans.

With Cloud Hosting you can install various applications with a single click from cPanel. However, one may have less control over the hosting settings when it comes to distributing functions across multiple servers.
Customization with respect to VPS Hosting works in the same fashion as it does for a Dedicated Server. VPS hosting gives users full root access replete with complete control over the operating systems, the website as well as all the software. Customization and configuration can be done as desired. However, since every physical host system is capable of running only one OS, the choice of OS may be limited in case the provider doesn’t provide many choices.

Disclaimer: Content may be edited for style and length. Source